33 Things I've Never Told You (or, How to Re-Introduce Yourself and Kick Your Watered-Down Self in the Ass) 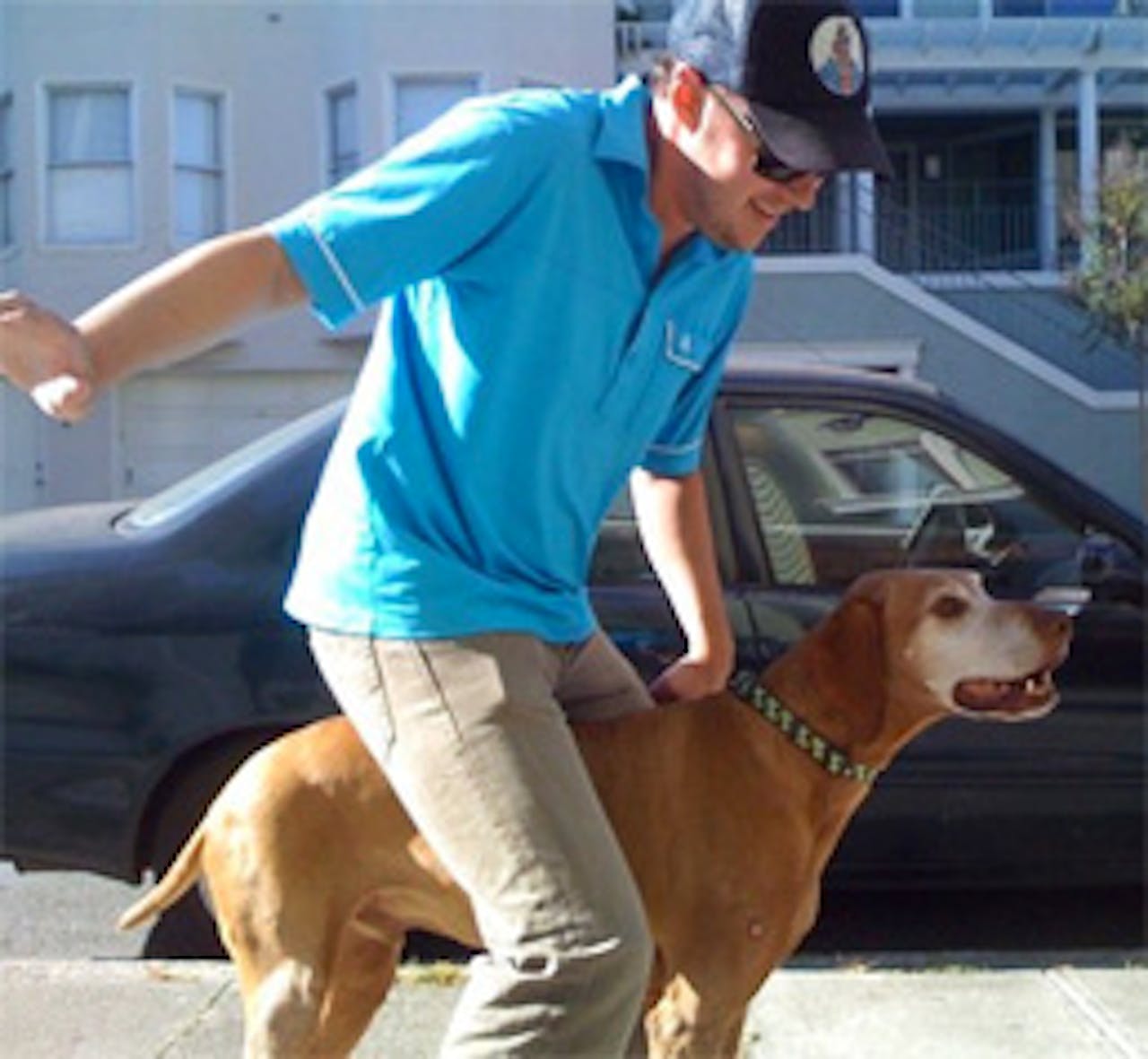 That’s me, riding my dog in the photo up there. I do shit like that sometimes. Maybe you didn’t know that, so let me explain.

For the past 16 months that I’ve been blogging here, I have to tell you I’ve never been fully satisfied with the “voice” I’ve created for myself. By that, I mean the personality I’ve conveyed through my words.

In writing, especially blogging, there’s something known as finding your voice. It’s about how you come across to your readers. You know, serious, funny, witty, stoic, focused, humble, demure, etc. It’s about showing depth of personality.

I’ve been reading a lot on the subject of voice and self expression lately. Also of finding your “right people,” or the people you naturally click with and would be attracted to if you met in person.

There’s a part of me that has never felt fully self-expressed here. I’m coming across in mono, not stereo. I’ve created a persona that isn’t completely me. I’ve fallen prey to the old media line of thinking that you should be “professional” and serious in public settings. Or maybe I just haven’t had the courage to share who I am fully, or the skills to do so.

C’mon bloggers, I know you know what I’m talking about. Most every writer struggles with this in some way.

How do you convey your full personality through words? It’s not an easy thing. How do you show that you’re passionate, gutsy, funny, provocative, dynamic and vibrant like your friends know you to be? How do you let people know your full values, traits and even quirks through writing?

There are two areas that keep us (or me) from fully self-expressing ourselves:

Without the courage and skills, many of us end up with a half-assed persona online. Something that sounds stiff and formal in a way that we don’t sound in person. (Side note, this doesn’t just apply to writing, either. You can create personas that you use in real life in different situations, especially in business situations).

We create these little boxes for ourselves that can sound dry or boring, and then we wonder why we’re not a break-out success like we want to be.

The benefits of being fully self-expressed are too great not to consider. Your full three-dimensional personality will really click with the people you were meant to work with or write for. You’ll become magnetic to certain people, drawing them in with your true self. You’ll form a bond with those people like you never could with a watered-down self. Those relationships will become the foundation of your success.

Plus, it’s just so much easier to be yourself.

Oh, and I’m not talking about baring all of your past indiscretions, telling every secret there is to tell about yourself, or otherwise sharing everything about your history. I’m talking about getting your personality across. That will probably require some stories about your past, but not everything. You don’t have to be fully transparent to be fully self-expressed.

Some of my favorite writers have always been the boldest, brashest, wittiest and most expressive amongst us. People like Naomi Dunford, Lisa Barone, Ashley Ambirge and Johnny B. Truant always captivate me like no one else (and give me a case of the jealousies).

So, how can the rest of us become more fully self-expressed? I’m not sure it’s an immediate switch you can make. Maybe it is. I’m not the expert, remember? Maybe thinking of your blog as a performance is the answer.

In any case, I just know I don’t want to come across with a watered-down personality. I want people to know who I really am so I can really connect with the people I’m meant to connect with on a deeper level. And the people who don’t “get me” can continue searching for their right people elsewhere.

There’s a bolder side of me with more dimensions that I want to introduce you to.

To kick off this new chapter in my blogging life, I’m going to start by sharing 33 things I’ve never shared with you before. Hopefully you’ll know more about the real me after reading this. And then later, if I get back to not sounding like my full self on the blog again, you can call me on it, OK?

There’s no turning back now. Here we go:

Thanks for reading all the way through this experiment. If you resonate with the soul I’ve just bared, subscribe to this blog. If I’ve offended you or turned you off, thanks for reading anyway. I know that I won’t appeal to everyone, and that’s OK.