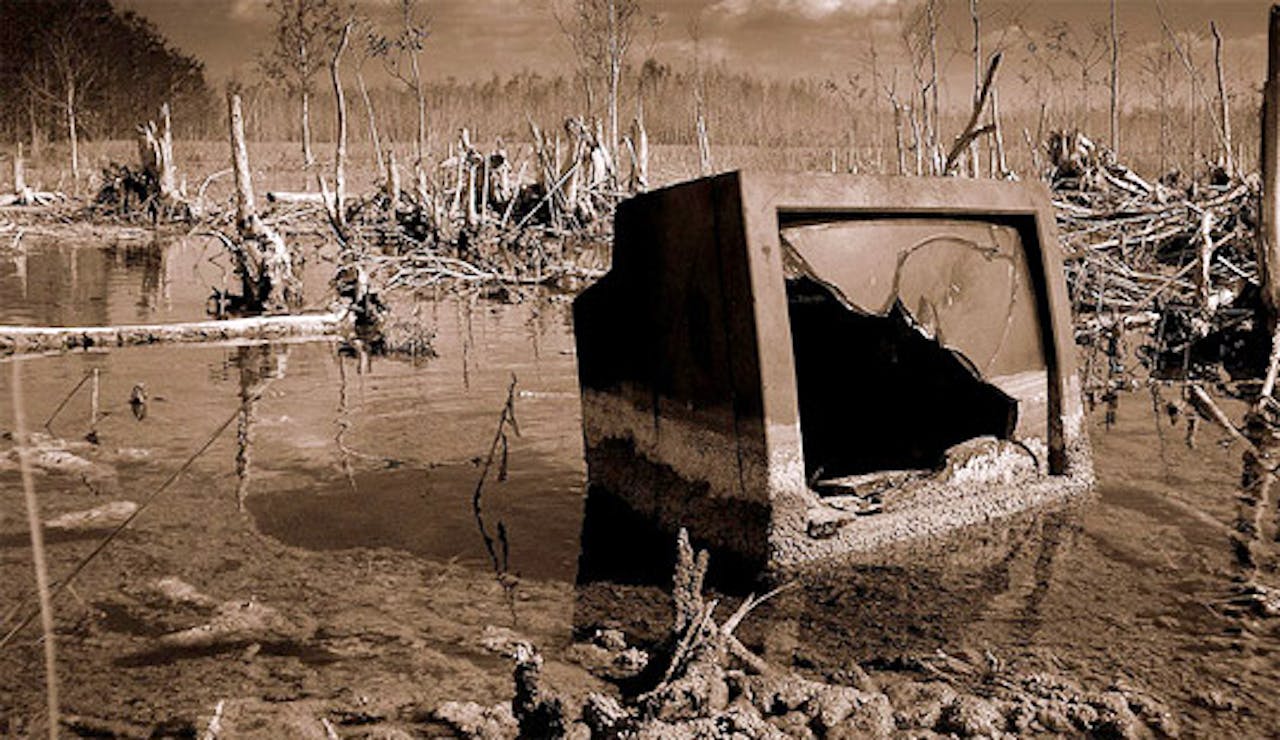 I’ve been torn over the issue of “TV, or no TV” lately.

On one side, you have the intellectuals, minimalists, art crowd and conspiracy theorists who have sworn off television as a culture-and-intellect-robbing waste of time and money.

On the other side, you have people who like to relax and be entertained after a long day, and people who like a good story that makes them laugh or cry, or learn something new.

I understand both sides, and I know there’s much more to it than that.

I’ve been a part of both camps recently. I grew up with TV (telly for you Brits out there), starting with Sesame Street and Fraggle Rock, later Magnum P.I. and the “A” Team, and eventually MTV and Comedy Central. Recently I’ve been a big fan of anything HBO (Curb Your Enthusiasm or Six Feet Under anyone?). OK, and I’m also hooked on So You Think You Can Dance, but don’t tell anyone.

I definitely wouldn’t want to hear a tally of how many hours I’ve spent in front of the TV in my life. That might be a little depressing for most of us.

Seriously, stop for a moment. How many hours of TV do you watch a week? Imagine what that has added up to over the years.

During our months in Mexico recently, my wife and I lived almost completely TV-free. I have to say, it was pretty awesome.

Instead of just staying home to watch something during the week, we went out to have dinner and listen to live music way more often. We also found ourselves reading and listing to music at home more. I think we also had way more conversations with each other than when living with TV.

Of course, much of that could be attributed to living abroad. It’s exciting to be in another country, and the lower cost of living makes it much more reasonable to go out most nights.

Would the same be true for us at home in the U.S.? We’re going to try to find out shortly. We just canceled cable, and may get rid of the TV altogether (although for now we still have it available for Netflix).

So I definitely understand the attraction of living without TV. There’s a whole lot of life to experience out there, and TV tends to keep you from it. I’ll let you know how it pans out for us.

When did it become a crime to watch TV?

One thing I really don’t understand is why some people act like it’s a crime to watch television. Or worse, they act like they’re intellectually superior for not watching TV. Really? Because I keep up on some shows, that makes me some kind of commoner or something?

Do you know the people I’m talking about? Mostly they live in urban areas I think. In the burbs it’s less common for anyone not to have a TV.

Here’s the thing about television. Some of it is entertaining or even useful. Most of it is absolute garbage. But watching TV isn’t some kind of crime or inherently dumbing experience.

In some cases, a little TV can actually enhance your real-life conversations. I’ve had some hilarious moments with friends reliving some sketch on SNL, or talking about what a train wreck the celebrity-mess-du-jour was.

Your choice not to watch TV doesn’t make you a saint, even though you’re probably right that most people would be better off without TV (or at least with a whole lot less of it). Just sayin’.

When did TV become a substitute for real life?

On the other hand, for the few situations where television has it’s place, it also has dampened plenty of lives.

Sadly, television has become a substitute for the real world to many people. It’s an addictive excuse that keeps you from leaving the house and interacting with real people.

I was listening to a comedian last week who was a TV actor (ironically this was in a real life comedy club). He had a whole segment that started with something like “who the hell wants to travel in real life anymore? There’s a channel for that on TV. 6 hours on a plane, airport security, sitting next to strangers. Yuck. My sofa and I took a great trip to Nepal last week, and we were there and back in 30 minutes.”

How sad but true is that? The Pixar film WALL·E might have really nailed our future if we don’t unplug and get out into the real world a little more.

On top of keeping us from experiencing the real world, TV commercials also constantly make us feel inadequate about ourselves and make us think buying more stuff, getting thinner or taking a pill is the solution.

Which side are you on?

Oh, and I think many of these same arguments can be made of the Internet in general (a place where I spend far too much time). So don’t get all high-and-mighty about abstaining from TV if you’re constantly connected online.

Do people who abstain from TV have the moral upper-hand or are they just smug bastards? Is there a middle ground? Is the Internet the same as watching TV? Sound off in the comments!